The Association for Computing Machinery (ACM) is a US-based international learned society for computing. It was founded in 1947 and is the world's largest scientific and educational computing society.[1] The ACM is a non-profit professional membership group,[2] claiming nearly 100,000 student and professional members as of 2019.[3] Its headquarters are in New York City.[4]

The ACM is an umbrella organization for academic and scholarly interests in computer science (informatics). Its motto is "Advancing Computing as a Science & Profession". 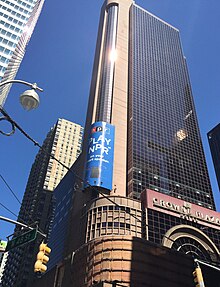 ACM is organized into over 171 local chapters and 37 Special Interest Groups (SIGs), through which it conducts most of its activities. Additionally, there are over 500 college and university chapters. The first student chapter was founded in 1961 at the University of Louisiana at Lafayette[6]

Many of the SIGs, such as SIGGRAPH, SIGDA, SIGPLAN, SIGCSE and SIGCOMM, sponsor regular conferences, which have become famous as the dominant venue for presenting innovations in certain fields. The groups also publish a large number of specialized journals, magazines, and newsletters.

ACM also sponsors other computer science related events such as the worldwide ACM International Collegiate Programming Contest (ICPC), and has sponsored some other events such as the chess match between Garry Kasparov and the IBM Deep Blue computer.

Although Communications no longer publishes primary research, and is not considered a prestigious venue, many of the great debates and results in computing history have been published in its pages.

ACM has made almost all of its publications available to paid subscribers online at its Digital Library and also has a Guide to Computing Literature. Individual members additionally have access to Safari Books Online and Books24x7. ACM also offers insurance, online courses, and other services to its members.

In 1997, ACM Press published Wizards and Their Wonders: Portraits in Computing (ISBN 0897919602), written by Christopher Morgan, with new photographs by Louis Fabian Bachrach. The book is a collection of historic and current portrait photographs of figures from the computer industry.

The ACM Portal is an online service of the ACM.[11] Its core are two main sections: ACM Digital Library and the ACM Guide to Computing Literature.[12]

The ACM Digital Library is the full-text collection of all articles published by the ACM in its articles, magazines and conference proceedings. The Guide is a bibliography in computing with over one million entries.[11] The ACM Digital Library contains a comprehensive archive starting in the 1950s of the organization's journals, magazines, newsletters and conference proceedings. Online services include a forum called Ubiquity and Tech News digest. There is an extensive underlying bibliographic database containing key works of all genres from all major publishers of computing literature. This secondary database is a rich discovery service known as The ACM Guide to Computing Literature.

ACM adopted a hybrid Open Access (OA) publishing model in 2013. Authors who do not choose to pay the OA fee must grant ACM publishing rights by either a copyright transfer agreement or a publishing license agreement.[13]

ACM was a "green" publisher before the term was invented. Authors may post documents on their own websites and in their institutional repositories with a link back to the ACM Digital Library's permanently maintained Version of Record.

All metadata in the Digital Library is open to the world, including abstracts, linked references and citing works, citation and usage statistics, as well as all functionality and services. Other than the free articles, the full-texts are accessed by subscription.

There is also a mounting challenge to the ACM's publication practices coming from the open access movement. Some authors see a centralized peer–review process as less relevant and publish on their home pages or on unreviewed sites like arXiv. Other organizations have sprung up which do their peer review entirely free and online, such as Journal of Artificial Intelligence Research, Journal of Machine Learning Research and the .

Main category: Members of the Association for Computing Machinery

In addition to student and regular members, ACM has several advanced membership grades to recognize those with multiple years of membership and "demonstrated performance that sets them apart from their peers".[14]

The number of Fellows, Distinguished Members, and Senior Members cannot exceed 1%, 10%, and 25% of the total number of professional members, respectively.[15]

Main article: ACM Fellow
For a more comprehensive list, see List of Fellows of the Association for Computing Machinery.

The ACM Fellows Program was established by Council of the Association for Computing Machinery in 1993 "to recognize and honor outstanding ACM members for their achievements in computer science and information technology and for their significant contributions to the mission of the ACM." There are 1310 Fellows as of 2020[16] out of about 100,000 members.

List of Distinguished Members of the Association for Computing Machinery [17]

Also in 2006, ACM began recognizing Senior Members. According to the ACM, "The Senior Members Grade recognizes those ACM members with at least 10 years of professional experience and 5 years of continuous Professional Membership who have demonstrated performance through technical leadership, and technical or professional contributions".[18] Senior membership also requires 3 letters of reference

ACM and its Special Interest Groups (SIGs) sponsors numerous conferences with 170 hosted worldwide in 2017. ACM Conferences page has an up-to-date complete list while a partial list is shown below. Most of the SIGs also have an annual conference. ACM conferences are often very popular publishing venues and are therefore very competitive. For example, the 2007 SIGGRAPH conference attracted about 30000 visitors, and CIKM only accepted 15% of the long papers that were submitted in 2005.

The ACM is a co–presenter and founding partner of the Grace Hopper Celebration of Women in Computing (GHC) with the Anita Borg Institute for Women and Technology.[32]

Some conferences are hosted by ACM student branches; this includes Reflections Projections, which is hosted by UIUC ACM.[citation needed].[33] In addition, ACM sponsors regional conferences. Regional conferences facilitate increased opportunities for collaboration between nearby institutions and they are well attended.

The ACM presents or co–presents a number of awards for outstanding technical and professional achievements and contributions in computer science and information technology.[34][35][36]

Over 30 of ACM's Special Interest Groups also award individuals for their contributions with a few listed below.[39]

See also: Category:Presidents of the Association for Computing Machinery

The President of ACM for 2020–2022 is Gabriele Kotsis, Professor at the Johannes Kepler University Linz. She is successor of Cherri M. Pancake (2018–2020), Professor Emeritus at Oregon State University and Director of the Northwest Alliance for Computational Science and Engineering (NACSE); Vicki L. Hanson (2016–2018), Distinguished Professor at the Rochester Institute of Technology and Visiting Professor at the University of Dundee; Alexander L. Wolf (2014–2016), Dean of the Jack Baskin School of Engineering at the University of California, Santa Cruz; Vint Cerf (2012–2014), an American computer scientist who is recognized as one of "the fathers of the Internet"; Alain Chesnais (2010–2012), a French citizen living in Toronto, Ontario, Canada, where he runs his company named Visual Transitions; and Dame Wendy Hall of the University of Southampton, UK (2008–2010).[40]

ACM has five "Boards" that make up various committees and subgroups, to help Headquarters staff maintain quality services and products. These boards are as follows:

ACM Council on Women in Computing

ACM-W,[41] the ACM council on women in computing, supports, celebrates, and advocates internationally for the full engagement of women in computing. ACM–W's main programs are regional celebrations of women in computing, ACM-W chapters, and scholarships for women CS students to attend research conferences. In India and Europe these activities are overseen by ACM-W India and ACM-W Europe respectively. ACM-W collaborates with organizations such as the Anita Borg Institute, the National Center for Women & Information Technology (NCWIT), and Committee on the Status of Women in Computing Research (CRA-W).

The ACM-W gives an annual Athena Lecturer Award to honor outstanding women researchers who have made fundamental contributions to computer science.[42] This program began in 2006. Speakers are nominated by SIG officers.[43]

ACM's primary partner has been the IEEE Computer Society (IEEE-CS), which is the largest subgroup of the Institute of Electrical and Electronics Engineers (IEEE). The IEEE focuses more on hardware and standardization issues than theoretical computer science, but there is considerable overlap with ACM's agenda. They have many joint activities including conferences, publications and awards.[45] ACM and its SIGs co-sponsor about 20 conferences each year with IEEE-CS and other parts of IEEE.[46] Eckert-Mauchly Award and Ken Kennedy Award, both major awards in computer science, are given jointly by ACM and the IEEE-CS.[47] They occasionally cooperate on projects like developing computing curricula.[48]

ACM has also jointly sponsored on events with other professional organizations like the Society for Industrial and Applied Mathematics (SIAM).[49]

In December 2019, the ACM signed a letter[50] to President Trump opposing open access. A petition against this was formed and collected over a thousand signatures. In reaction to this, ACM clarified its position.[51][52]

The SoCG conference, while originally an ACM conference, parted ways with ACM in 2014[53] because of problems when organizing conferences abroad.[54]