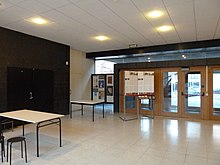 Location of the awards ceremony of WLM: Royal Institute for Cultural Heritage, Brussels

The Royal Institute for Cultural Heritage (KIK-IRPA, for Koninklijk Instituut voor het Kunstpatrimonium - Institut Royal du Patrimoine Artistique) is a Belgian federal institute of the Belgian Federal Science Policy Office (BELSPO). The institute studies and conserves the artistic and cultural assets of Belgium. Its mission consists in research and public service. The personnel of the institute consists of historians of art, photographers, chemists, physicists and conservators – restaurators. is the General Director of the institute.

The institute was established in 1948 as the  [fr] (Central Iconographic Archives of National Art and the Central Laboratory of Belgian Museums, ACL). Its founder and first director was Paul B. Coremans (1908-1965). In 1957 the ACL becomes one of the ten national scientific institutions under the name Royal Institute for Cultural Heritage (KIK-IRPA). The building of the institute, finished in 1963, was the first in the world specially designed to promote the interdisciplinary approach to works of art. The building was designed by architect based on an initial technical concept by René Sneyers.

The institute consists of three departments: